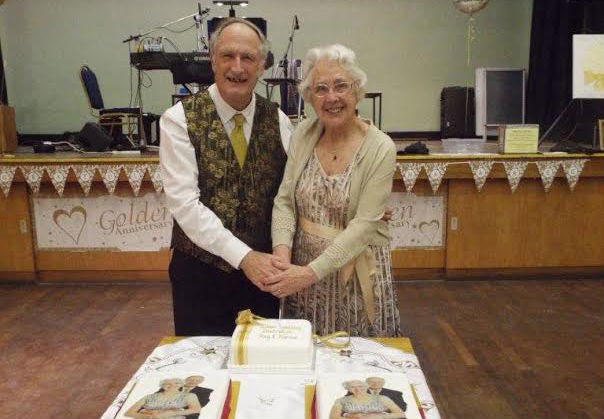 Reg and Norma Battle were married on 26th December 1964 and moved to Poynton in February 1966. On Boxing Day 2014 they reached their Golden Anniversary. They celebrated with a country-dance party for 130 family and friends on Sunday 4th January, at Poynton Civic Hall with the band Kendal Green.

Dancers and Musicians from around England joined the Members of Adlington Folk Dance Club and their family for the party. Refreshments were supplied by the Poynton Picnic basket.

The invitation had suggested no presents, with an option to donate to charity: over £600 was donated and will be shared between the Poynton First Responders and the Greater Manchester Neurosciences Centre at Salford Royal.

Reg and Norma are both Presidents of the Adlington Folk Dance club. The club marked their Anniversary by presenting them with a wonderfully engraved vase from Coppice Crystal. A club member had devised a new dance especially for them, naming it “Battle D’Or”.