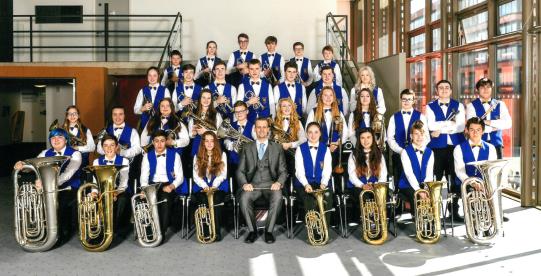 On Sunday 29th January the Poynton Youth Brass Band competed in the 2017 British Open Youth contest held at the Preston Guild Hall. In a very high quality competition, Poynton excelled and achieved a superb and richly deserved second place. The programme selected by the band’s musical director and conductor Mike Eccles was a real winner with the audience and judges alike as it combined rock anthems such as “Run to the Hills” and “Paint it Black” with more melodic numbers such as ‘Wind beneath my wings’. The success didn’t end there, as the band’s principal bass player, Charlie Jones, also received the ‘Best Soloist’ award for ‘Bass in the Ballroom’.

The PYBB rehearse every Friday at the Poynton Methodist Church (Near Waitrose) and, as well as the main Youth band, also have a junior band for younger players and a training academy for new learners. If you are a young brass or percussion player (or wish to be) up to the age of 19, then come along to a rehearsal night and find out about the band; they would love to see you.

The youth band’s next concert is 11th March at the George Lane URC and their next contest is the UK National Championships in April to be held at Salford University. A full concert itinerary can be seen on the band’s website at www.pybb.org.uk