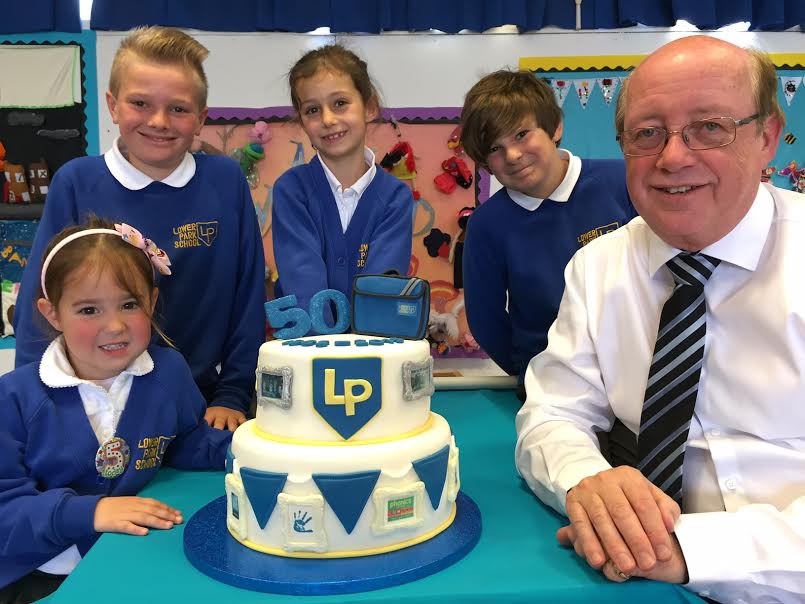 Lower Park School would like to thank the many hundreds of friends, colleagues, past pupils, current staff members and families who helped them celebrate its 50th birthday – a very special landmark in the history of the school.

The first of the celebrations kicked off with just over 300 people enjoying a hog roast barbecue, music and dancing at an event that was superbly organised by Kate McLean, one of the School’s teaching assistants.

On 29th April, the official birthday, all the children and staff gathered in the hall with a giant birthday cake. After Ian Coulson, the headteacher read from the 1965 school logbook, the children sang ‘Happy Birthday’ and a ‘Song of Blessing’ before being asked to make a wish for the school.

Mrs Laffey, the head cook, prepared a typical 1965-style lunch of ‘mince and two veg’ followed by the dessert of Manchester tart. The children really liked it.

Later, the school opened its doors for an Open Day, with the Year 6 children taking responsibility for literally hundreds of visitors around. Visitors had come from all corners of the country and two were class teachers from the day the school opened – Miss Davies and Miss Hardy. There were also members of staff from years ago and many former pupils who were amazed at how the school had changed and developed. All of the visitors commented on how well  Year 6 pupils spoke with great knowledge and pride in the school. They were ‘perfect hosts.’

After the school closed, past and present members of staff, governors and PTA members gathered together to share memories and celebrate the work of the school over the last 50 years. The school swing band and choir provided a musical start to the occasion before speeches were made. The current School Council chair, Maria Bateman, had written her own speech, talking about what Lower Park had been like for her. Her competent, confident and heart-warming speech was exceptional. Mr Colin Richards, chair of governors, also spoke with pride and conviction about the work of the school.

The school has only had four permanently appointed headteachers in its 50 years; Mr Yeomans, Mr Beckett, Mr Norris and Mr Coulson. Mr Norris spoke about the school and how he had left Lower Park to join OFSTED as an HMI and modelled his writing of the inspection framework on the teaching and learning at Lower Park. He too, has fond memories and a deep affection for the school. Finally, current headteacher Ian Coulson wrapped up the day saying ‘It has been an amazing day and one of those special days in the life of the school that I will always remember with pride. Our unique and special school, with its special children, staff and parents is so highly regarded by so many. It has been my privilege to have been a part of this wonderful school”