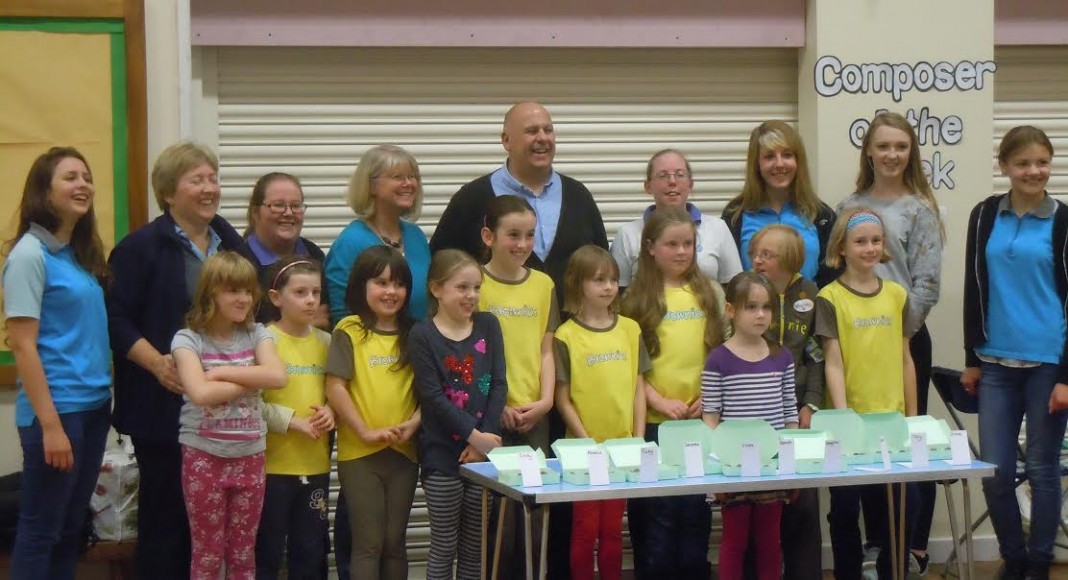 Like most of the nation, the Brownies and Leaders from 8th Poynton Brownies have been glued to the telly for weeks, watching the drama unfolding in the Great British Bake Off tent. And the Brownies were particularly interested to follow the bakes of Luis, a Poynton local who reached the final of the show.

At the Brownies autumn brainstorming session, the inevitable moment arrived. “Brown Owl, Tawny Owl, can we do bake off too?” piped up a little voice. And before we knew it, the Brownie Bake Off was born. A week of cake designing followed, and a second frantic week of leaders shopping and weighing and planning!

Following the format of the show, the girls completed a signature bake: icing four fairy cakes, each with the exact same design; a technical bake: following instructions to make eight delicious chocolate truffles; and a showstopper: bringing in their own cake and cookie creations that they’d made at home.

However, this was no ordinary Brownie meeting, helping Val Parry – a friend of the unit – with the judging, was none other than Poynton’s own Bake Off finalist, Luis Troyano! He spent time talking with each of the girls, and encouraging them about their baking. He was really impressed with how seriously the girls were taking the competition, and it took the judges a long time to agree on a Star Brownie Baker! The honour was eventually awarded to Izzy Dyke, age 10, for her strawberry lace swirl fairy cakes, and her beautifully finished chocolate sponge.

The Brownies would like to thank Luis again for coming to visit and join in the fun, and also to thank Val for helping with the judging.

If you’re interested in helping with Brownies, or if you’re aged 7-10 and want to be a Brownie, please contact Sue Dyson on sue@thedysons.net for more information about Brownies in Poynton. You can follow 8th Poynton Brownies on twitter at @8thPoynton and Luis has his own website at www.luistroyano.com.