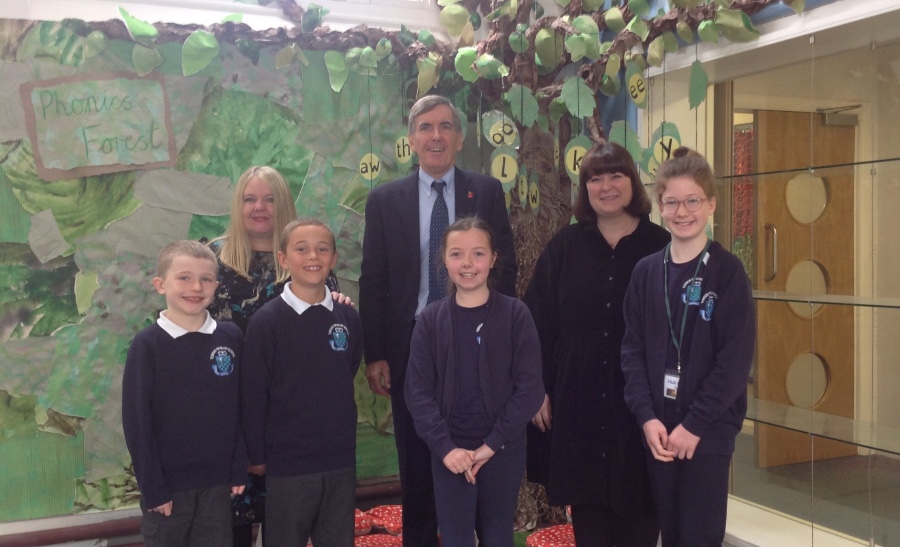 Local MP, David Rutley, visited Vernon Primary School in Poynton on ‘Bonfire Night’. But it wasn’t just Guy Fawkes that was on the agenda, as the School has been participating in the well-established, and highly popular, UK Parliament Week.

David met with School Headteacher Mrs Carvell and her team, along with pupils from Years 5 and 6 who asked him to explain more about his role as a Parliamentarian. David set out how Parliament works and the work he does on behalf of residents in Macclesfield and Poynton both locally and in Westminster.

The pupils followed up David’s presentation with a series of diverse and, sometimes, exacting questions on topics including the environment and on a number of local priorities. There were also questions on what opportunities there are to work in Parliament and how to become a Member of Parliament.

During this ‘Question Time’, the pupils also held a debate and subsequent vote on the thorny subject of whether homework should be made compulsory! The session was chaired by one of the pupils who acted as an impromptu ‘Speaker of the House of Commons’.

David has been an enthusiastic, long-term supporter of UK Parliament Week for many years and further details of the initiative are available here: https://www.ukparliamentweek.org/en/about/ . The programme is now well established countrywide with many schools taking part each year. Last year, almost one million people joined in over 8,000 activities in every region and nation of the UK.

After his visit, David said, “I was grateful to be invited to visit Vernon Primary School as part of this year’s UK Parliament Week. Learning about how Parliament and our democratic processes work is an important part of our education. I hope that even more schools are able to take part next year. I would like to thank Mrs Carvell and her team, along with the teachers in the many other schools in our communities, for all their hard work on behalf of their pupils and local families during what has been a very challenging last couple of years.”