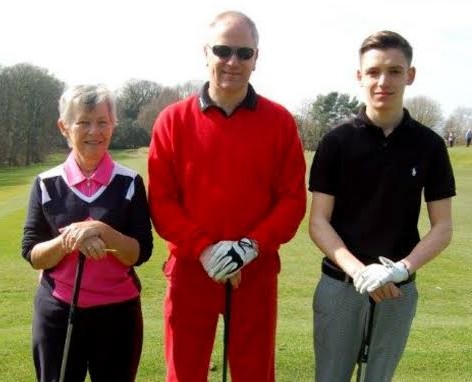 On Sunday 22nd March the three recently appointed Captains of Davenport Golf Club Poynton celebrated the beginning of their 2015 golfing season with a Drive-In, attended by an enthusiastic audience of members.

Paul Robinson Gents Captain, Pat Brodie Ladies Captain and Jared Merrygold Juniors Captain joined members, sipping Bucks Fizz in the sunshine on the Club House terrace, before moving out for their Drive -In to the 14th hole, a notoriously difficult par 3 on which to hit the green in one.

Accompanied by gentle heckling from the members, Jared’s tee shot soared high but not completely straight, Pat’s drive sliced to the right and Paul’s shot followed suit to show solidarity!

The celebrations continued with a mixed competition, a tradition at Davenport Golf Club, which was won by Max Aitken, Jill Carswell, June Davenport and Phil Housley.