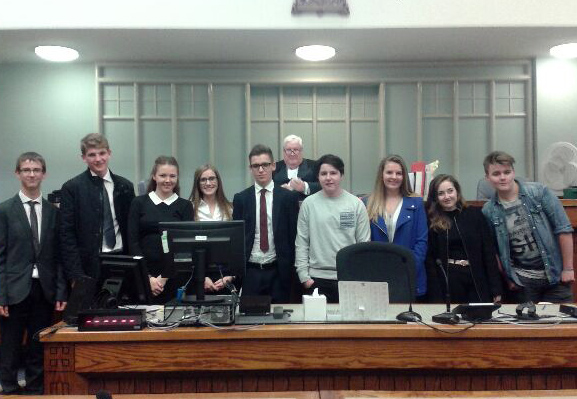 Students from Year 12 at Poynton High School raised the Bar this year in the Citizenship Bar Mock Trial Competition. The Poynton team, who competed at Minshull Street Crown Court, Manchester came a very close second to Wilmslow High School with an overall difference of only four points throughout the day. In this National Mock Trial Competition students take on the roles of barristers and witnesses and present their case against teams from other schools. First they have to become familiar with the case, then they have to battle it out in real courtrooms, in front of real judges and their performances are judged by Circuit Judges, Recorders and senior barristers or advocates

Teams from all over Manchester competed against each other for a place in the Regional Final later next year and the Poynton team worked hard throughout the day to achieve second place. Cath Roper, Community Officer at the school, said “ I was so proud of all the students who took part. They were outstanding in their knowledge and understanding of the legal system and fought with great conviction throughout each round of the competition. They were a credit to the school and competition.”