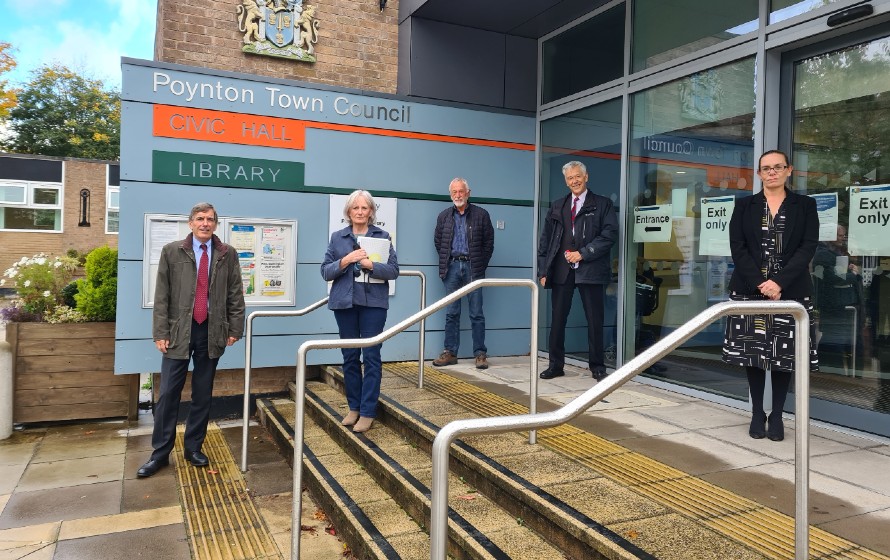 Local MP, David Rutley, joined local representatives at a meeting to discuss the need for a comprehensive flood action plan to be produced for Poynton and other local communities impacted by the flooding incidents in the summer of 2019, some 14 months after these devastating events.

The meeting was held in Poynton on Friday 9th October following the publication of the Section 19 Report by Cheshire East Council and other stakeholders on the 2019 flooding incidents that significantly affected Poynton, Bollington and Kettleshulme in the Macclesfield constituency and other communities in Cheshire East.

At the meeting, David joined Poynton Councillor Mike Sewart, Wendy Daly, Chair of the residents’ Flood Action Group, Barry Johnson, also a group member, and Haf Barlow, Town Clerk of Poynton Town Council, to discuss local concerns and set out their concerns regarding the lack of a complete action plan being included in the Section 19 Report.

The attendees recognised that while the report provides extensive descriptions of the challenging flood incidents, it is not nearly as detailed on the actions that need to be taken. This was felt to be particularly disappointing, as the clear ask of local residents, and David, shortly after the flooding incidents was for a clear and thorough action plan to be developed. However, over a year later, the report does not demonstrate that this has happened.

Unfortunately, the actions set out in this report are less specific than in the Section 19 Report relating to the flooding incidents that took place three years earlier in 2016 – and that report was found to be lacking in light of the 2019 incidents.

David was grateful for the chance to address these issues during the public speaking time at last week’s Cheshire East Council Cabinet meeting. In his remarks, David recognised that coronavirus will have made establishing an action plan more difficult, but joined Mrs Barlow in urging Cheshire East Council to now actively work to complete a comprehensive plan – one that covers all aspects of flood management from upstream natural flood management, to culvert clearance and improvement, and active water level monitoring, and includes clear stakeholder responsibilities and timescales.

At the Cheshire East Council Cabinet meeting, David and Mrs Barlow were told that a “task and finish” group would be established to complete the development of the action plan and that this group would include local Councillors and local groups with interests in this key issue.

After the meeting in Poynton, David said, “I am pleased to hear that a “task and finish” group will be established to help complete the action plan. That is a positive step forward. But it is vital that the plan is now completed as quickly as possible. To get the best plan in place, it will be important for local Councillors and representatives from the Poynton Town Council’s Flood Working Group and the local Flood Action Group to be fully involved.”