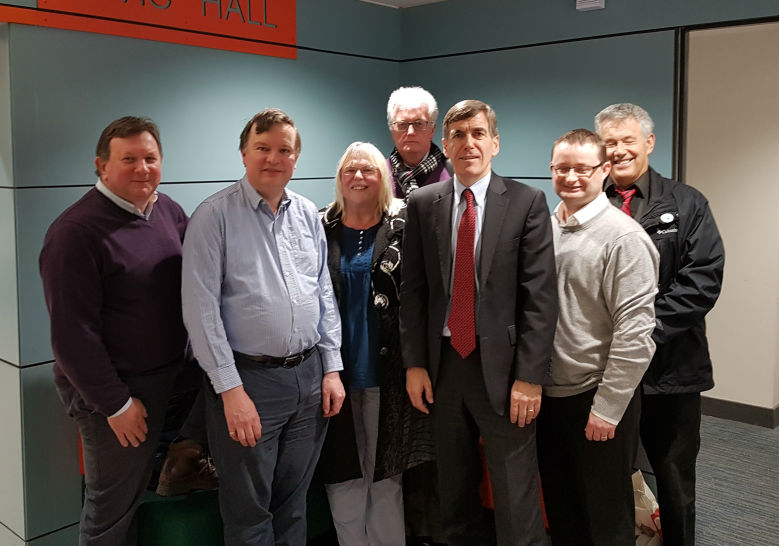 Local MP, David Rutley, met with a delegation of councillors from Poynton Town Council last week to discuss the Cheshire East Local Plan, which is currently being reviewed by a Planning Inspector.

The Town Council’s representatives – Laurence Clarke, Lee Podmore and Jo Sewart, along with Poynton’s Cheshire East Councillors Howard Murray, Mike Sewart and Mike Beanland – expressed their ongoing concerns about plans to build 650 new homes on the Green Belt in Poynton by the end of the Local Plan in 2030. Cheshire East Council supports the development of 450 homes on three Green Belt sites, at Hazelbadge Road, Chester Road and Sprink Farm on Dickens Lane.

Local councillors set out how they want people in Poynton to have a greater say on where the remaining 200 homes will be built on smaller sites in the village. They are also pressing to have the new many houses already built on small sites since 2010 included in the figures used to achieve the housing targets. Following the meeting, David will work to arrange a meeting between Poynton councillors and the Leader and Chief Executive of Cheshire East Council, to discuss these concerns further.

After the meeting, Cllr Laurence Clarke said: “There is a clear lack of information on how new infrastructure will be provided to cope with the extra traffic and pressure on schools, health and other public services generated by a significant increase in population. Whilst we accept there may be a need for some new houses, the final number, the locations, insisting that developers use previously developed (brownfield) land and the need for highway and other critical infrastructure improvements first, are the basis of our concerns.”

David said: “I understand and share the concerns raised by Poynton’s councillors. I recognise that more homes will be built in Poynton in the years ahead. However, there needs to be a stronger focus on developing brownfield sites, rather than building homes on the Green Belt. It is important that this view, which is widely shared by local residents, is more fully taken into account as local development plans are finalised.