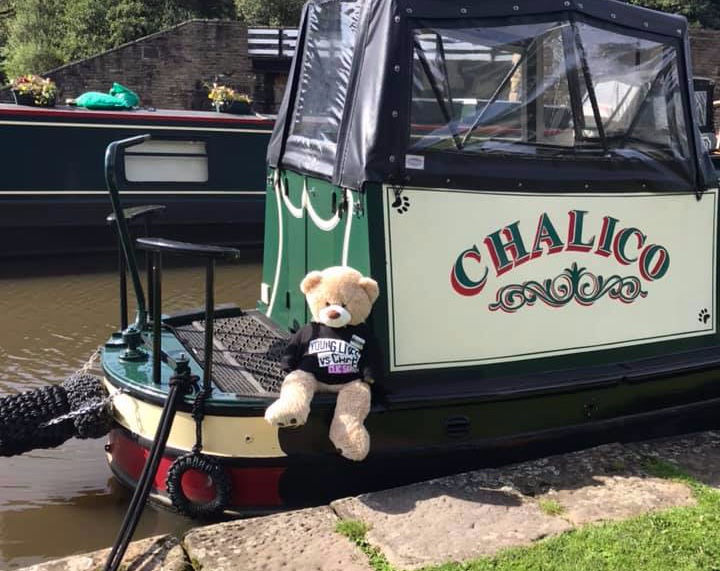 Morrisons colleagues in Chapel en le frith  have taken part in their leg of a walk to raise money for young cancer patients, in a fundraiser named ‘Malcolm’s Travels’ after Malcolm the teddy as he travels across the region.

The walk is in support for CLIC Sargent, the UK’s leading charity for children and young people with cancer to mark Childhood Cancer Awareness Month (CCAM).

Throughout September, Malcolm the teddy will be walked from Morrisons in Buxton, finishing up at the Warrington store at the end of the month in a walk called ‘Malcolm’s Travels’, in tribute to The Malcolm Sargent Cancer Fund – one of the two charities that joined together to form CLIC Sargent.

6 colleagues  from chapel en le frith walked 13 miles between chapel en le firth and Ponyton on Monday 2nd September to raise money for CLIC Sargent, Morrisons charity partner and to raise awareness of the travel costs children and families face when travelling for their cancer treatment.

Malcolm’s Travels aims to raise £24,000 for CLIC Sargent during September, as Morrisons colleagues across the UK are encouraged to complete their distance in the most creative way possible. The walk concludes on 23rd September with a party at the Warrington store, to celebrate the end of the walk.

CLIC Sargent is raising awareness of travel costs for Childhood Cancer Awareness Month. On average, a young person faces a 60 mile round trip when travelling for cancer treatment. This costs families £180 a month when treatment is at its most intense and as this can continue for years, families are often plunged into debt.Katherine SHAW Community Champion at Morrisons Poynton said:

. We are proud to support CLIC Sargent with Childhood Cancer Awareness Month by taking part in Malcolm’s Travels. Every pound raised helps CLIC Sargent support families in the high peak and around the country cope following a devastating cancer diagnosis.”

“A big thank you goes to all Morrisons colleagues i for taking part in this huge fundraiser for CLIC Sargent! We really appreciate the time and planning that has gone into the walk. Time and time again we are amazed at the commitment and creativity of colleagues to raise as much money as possible for young lives facing cancer.”

Alongside regional fundraising events and in-store fundraising, CLIC Sargent is calling on people to buy a golden Childhood Cancer Awareness Month pin badge at any Morrisons store for a suggested donation of £1. All the money raised through the campaign will help them support children, young people and their families with the financial and emotional impacts of cancer.

Morrisons have been in partnership with CLIC Sargent since February 2017 and have so far raised over £9 million for children, young people and their families facing cancer, up and down the country.
Throughout September, CLIC Sargent is sharing stories of families from across the UK who have experienced significant travel costs – look out for them on CLIC Sargent’s social media channels during the month.
you can donate to #malcomstravels via the just giving https://www.justgiving.com/fundraising/robert-harrison17