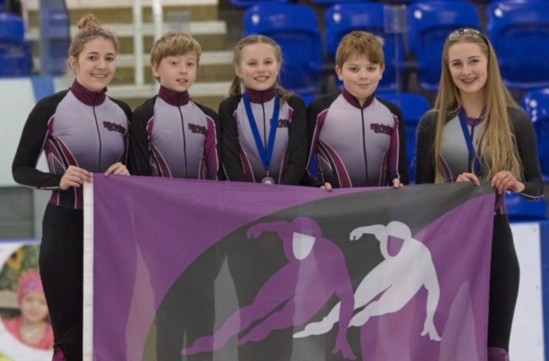 Months of hard work, grit and determination saw Isla O’Hara from Poynton win the silver medal in the ‘Peewee 2 girls’ category at the British Short Track Speed Skating Championships recently. Isla, 11, has been speed skating for two years. She joined four other skaters from Altrincham Speed Skating Club, who all qualified to take part in the annual two day competition in Sheffield in March.

Skaters battled it out against the clock, racing across a variety of distances, ranging from 222 metres through to 1500 metres. Competing skaters, including Winter Olympians Elise Christie and Kathryn Thomson, represented clubs from across Great Britain.
“Short track skating is a fast and exhilarating sport,” said Altrincham’s coach Pat Treacy. “We’re thrilled to have so many Altrincham Club skaters competing at the British Championships this year and are so proud of their success. It’s testament to months of dedicated training.”
Altrincham Speed Skating Club trains on a Sunday evening from 8:15pm to 9:15pm at Planet Ice, Altrincham and welcomes skaters of all ages and abilities.

If you are interested in joining a friendly, passionate club and learning a new skill (or refreshing an old one), then please contact Sally Sherard-Bornshin at: sbornshin@sky.com. The first session is free and skates and helmets can be provided.