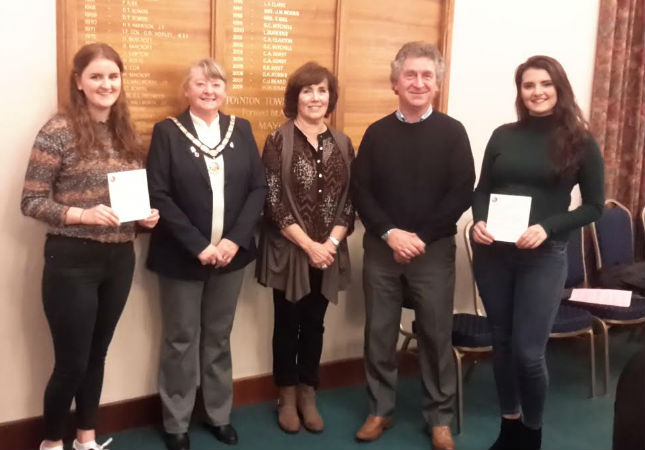 The Certificate of Civic Service award was presented in recognition of a sustained and significant contribution to the community to Keith Lambert. This is the first time that a husband and wife team have each won an award as Eileen, Keith’s wife, was given a Civic Award a few years ago. The Certificates of Youth Civic Service were presented to Libby Harkins and Emma Wylie. They join the other recipients who received their awards in July 2016.

Pat Clay, for her work organising the Higher Poynton Summerfest.

Geoff King, for his commitment to saving and reviving the Community Centre.

Keith Lambert, for promoting Poynton events, supporting the Community Centre with time and materials and leading the campaign to try to prevent the bank closing.

David Maiden, for his fund-raising work with the Round Table, in particular the Bonfire and Fireworks party.

Glenys Parry-Jones, for her work with the Twinning Association of Poynton, which recently led to the new Twinning link with Haybes in France.

Mark Warburton, for his long-standing contribution to the young and older sporting community, including Poynton Football Club.

The Youth Civic awards were given to:

Charlotte Hall, for her work with Rainbows and the Gilbert and Sullivan show.

Libby Harkins, for her work with Rainbows and Guides, St Paul’s church and Christian Aid week.

Emma Wylie, for gymnastics coaching and work with Brownies and in a special school.