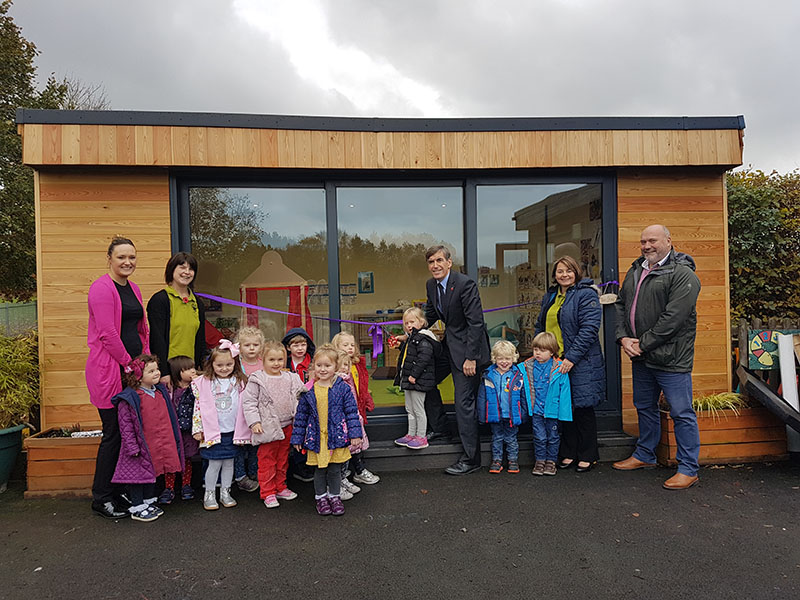 Children and staff were joined by Macclesfield MP, David Rutley, for the recent opening of Worth Pre-School’s new ‘snug’ facilities.

Alongside Manager Katheryn Davies, David performed the Opening Ceremony and Ribbon Cutting on the snug, which has been funded by Worth Primary School, in whose grounds the snug has been built. The snug, which was installed in August, ahead of the new term starting, comprises a multi-use room which will be used for group stories and singing, small group times, and music and dancing classes. Costing £21,000, it was designed by local firm Swift Garden Rooms, of Poynton.

David was shown the impressive new facilities and learned more about how they will support Worth Pre-School in promoting speech and language development for the children attending. He also discussed with staff the positive role that the new facilities will play in assisting Worth Pre-School to take more children and support the Government’s important commitment to increase the availability of childcare, whilst also remaining sustainable into the future.

Speaking after his visit, David said, “It was a pleasure to meet with the children and staff of Worth Pre-School and to have the opportunity to see their impressive new facilities. It was great to learn that the new snug is already having a positive impact on the children’s development and engagement. I wish all at Worth Pre-School continued success for the year ahead.”