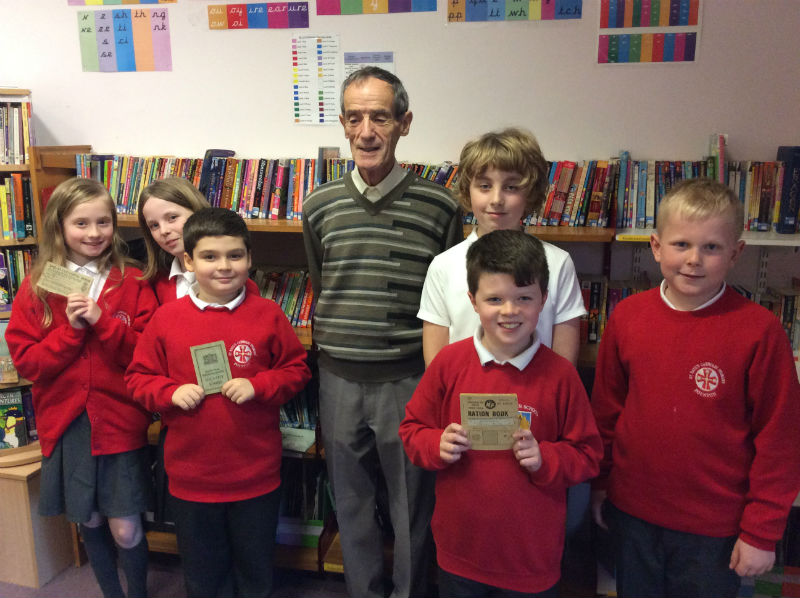 The Years 5 and 6 children at St. Paul’s Catholic Primary were honoured this month, when they were visited by Mr Peter Heaton, who was evacuated to Poynton from Manchester, during World War Two.

Mr Heaton spoke to the children about what it had felt like to hear that the country was at war, and about how he and his brothers and sisters had arrived at their school one morning, to be led by teachers to the train station so that they could travel to safer areas of the country.  He recalled the train journey they had taken and how his own family had been separated and sent on trains going in different directions.  He also described the families on Park Lane, with whom he had been placed and how difficult it was for those children who had been placed with families that didn’t want to look after evacuees.  He showed the children his old ration books for clothes and food and the class were amazed to discover how little food they’d had to live on.  They were also amused to hear about the excitement felt by the evacuated children, by the news that the local shop had bananas in stock!

The class, enrapt by the hour-long talk, had many questions to ask and can now approach their learning about World War Two, with great empathy and understanding.

Headteacher, Mrs Armstrong-Boyle, said:  “We are truly grateful to Mr Heaton for giving up his time to speak to our children and for sharing his memories of being a child evacuee in Poynton during WW2.  The opportunity for children to hear of his experiences first-hand brings history alive in a vibrant and thought provoking way.”