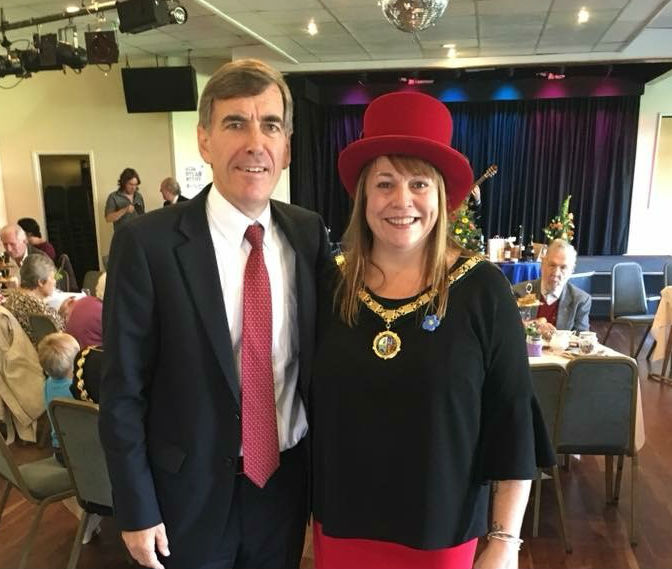 The well-attended event, kindly hosted by the Poynton branch of the Royal British Legion, raised funds for Living Well, a new local group from St George’s Church, Poynton, that provides social activities for local residents with dementia, and their families and carers. Thanks to the generosity of attendees, £576 was raised to help the group provide ‘away days’ for its clients, bringing a little extra cheer into their lives. This means that the amount that Cllr Gilmore aimed to raise in her year as Mayor, £1,500 by May 2018, has already been exceeded, with the total after the Afternoon Tea standing at £1,646.

The Mayor of Poynton nominated St George’s Living Well as her Mayoral charity in recognition of the big difference that the group has made in the local community since being established earlier this year. It was set up by members from St George’s Church in Poynton, after the Church became aware of the pressures that families and carers looking after people with dementia can experience as a result of their caring responsibilities.

As well as its plans to arrange trips for the group’s users, St George’s Living Well undertakes a range of dementia-friendly activities at its bi-monthly sessions, held on alternate Tuesdays in St George’s Church Hall. These include: sing-alongs, gentle exercise, arts and crafts, quizzes, games, and Bingo. Tea, coffee and biscuits are also available. Sessions are held free of charge, although the group welcomes small donations to cover the cost of refreshments.

Speaking after the event, David said, “I am very grateful to local residents for attending this event and the generosity they have shown in donating to this excellent local group. It was great to hear about the positive impact that St George’s Living Well has already made since its establishment earlier this year, providing a relaxed and friendly environment where people with dementia and their carers can socialise and enjoy activities. I wish the group every success going forward.”