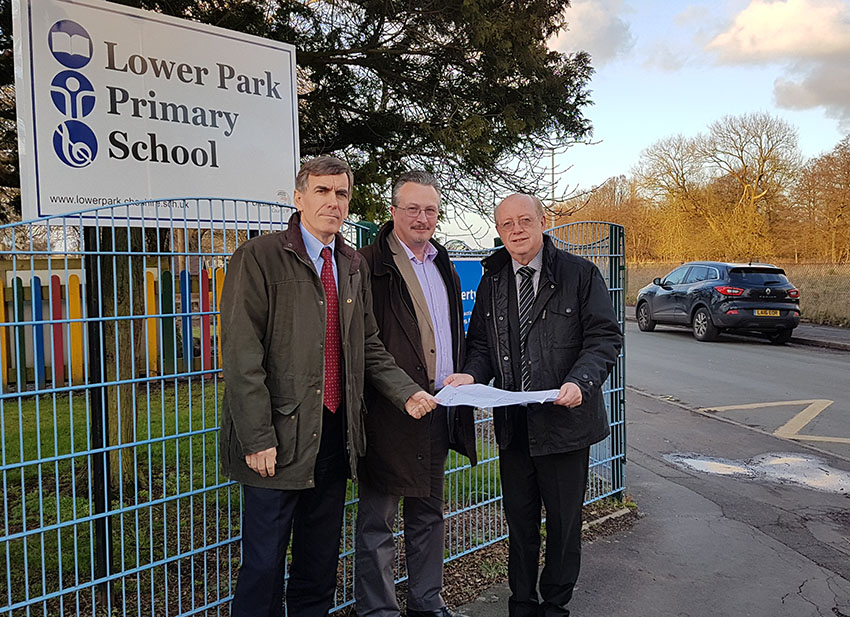 On a visit to Lower Park Primary School in Poynton, local MP, David Rutley, learned more about the School’s strong concerns regarding Persimmon Homes’ proposed development next to Hazelbadge Road.

Persimmon has submitted an application for planning permission for 146 dwellings on a site allocated for development in Cheshire East Council’s Local Plan, which is adjacent to Lower Park Primary School. David discussed the application with Mr Ian Coulson, the School’s Headteacher, and Mr Paul Banford, the School’s Vice-Chair of Governors, and agreed to follow up on their concerns as a priority.

The school is particularly concerned about the safety of pupils during the school run, with significantly increased vehicle movements forecasted near to the school at that time, on an already narrow street. The school has also highlighted the impact of extended construction work on traffic volumes, and the pupils’ exposure to fumes from construction vehicles. It is seeking amendments to the planning application that has been submitted to mitigate the impact of the development on the school, including: the construction of a car park for staff and visitors; new boundary fencing; and the installation of new windows.

Along with local Cheshire East councillors, David is requesting that members of the Planning Committee view the site at the time of the school run, so that they are aware of current traffic volumes and the potential impact that the new plans would have on the school and local residents.

Speaking after the meeting, David said, “Lower Park Primary School has raised a number of important concerns about the impact of this planning application on the pupils’ safety and well-being. I will continue to work with the school and local Cheshire East councillors, Mike Sewart and Michael Beanland, and take up these issues directly with Cheshire East Council.”