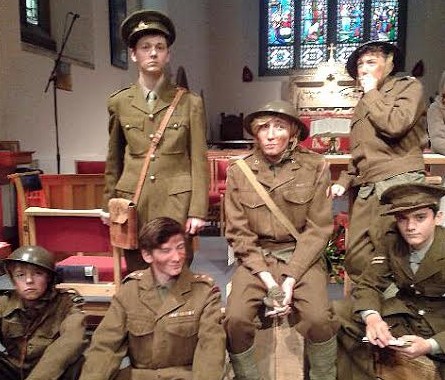 Poynton’s Remembrance Day Parade and Service took place on Sunday 9th November.  The parade, accompanied by the Vernon Building Society Poynton Brass Band, was followed by a service and an Act of Remembrance at St George’s Church in the village.  During the service Poynton High School students performed an original play written by the Mayor of Poynton, Sandra Horsman-Johnson, which told of the amazing events surrounding the Christmas truce during the First World War

The short play is a celebration of the resilience and bravery of the soldiers, triumphing in such horrific conditions in the trenches by keeping their spirits and hope alive with humour and song. The piece ended with a lovely rendition of Stille Nacht which drifted over to the British trench and stood as a reminder of that moment of truce Christmas 1914.

“The performance of the Poynton students involved lots of time and effort…and the spontaneous applause in church clearly showed how much it was appreciated by the hundreds of residents and visitors in the congregation. They were a real credit to the school.” said Sandra Horsman-Johnson after the service.

Pictured are some of the Poynton students who performed on the day.