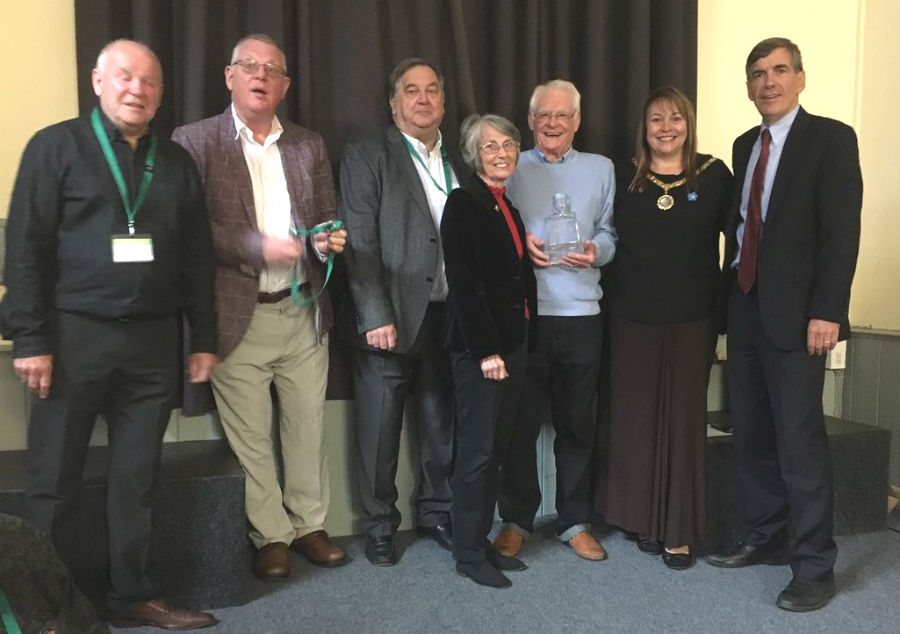 On a visit to Poynton Community Centre’s Open Day on Saturday 23rd September, local MP David Rutley thanked outgoing Trustee Cllr Geoff King for all his work to develop The Centre as a community hub and asset.

The Centre is Poynton’s oldest public building, and has been held in charitable trust for the benefit of the community since 1950. David has been a longstanding supporter of The Centre, and has been impressed by the transformation in its facilities and the range of services that it offers to local residents, thanks to the work of Cllr King and the rest of the management team at The Centre. This includes a new kitchen, which was installed earlier this year.

Alongside local residents and the Mayor of Poynton, Cllr Sarah-Jane Gilmore, David presented Cllr King with an inscribed decanter, in recognition of his inspiring and influential work with The Centre. Cllr King has decided to step down from his role as Trustee to spend more time with his family and pursue other interests, but he will continue to support the work of The Centre in his new role of Honorary President.

The Open Day was also a good opportunity to showcase the important role that The Centre plays within the Poynton community. The Centre currently houses a number of local organisations, serving a whole range of needs across the community. These include: the Poynton Men in Sheds Group, Voice to Voice Choir and Poynton Music School. As well as this, the Centre is also available for private hire, providing space for yoga, art and pottery classes. Further information about these organisations, activity classes and private hire facilities can be found on The Centre’s website: http://thecentreinpoynton.co.uk/

Speaking after the event, David said, “I would like to pay tribute to Cllr Geoff King for his tireless commitment to The Centre and the community that it serves. Over recent years, The Centre has been transformed and is once again a thriving community hub. I would encourage any local groups interested in hiring The Centre to contact the management team, and more local residents to find out about all that it offers.”