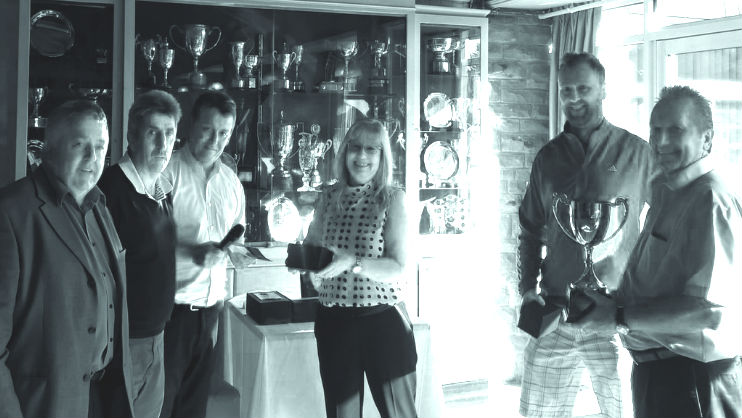 When Brian Coan, a popular member of Davenport Golf Club and a golfing fanatic, died suddenly in December 2016 his sister Linda Butler decided she would like to do something to perpetuate Brian’s memory. The golf club was delighted to whole- heartedly support the establishment of a new annual competition in Brian’s name. The Brian Coan Challenge Cup was born! The inaugural event was held on Sunday 25th June at Davenport Golf Club. A measure of Brian’s huge popularity was evident when over sixty golfers, friends and former colleagues travelled from all parts of the country to be hosted by Linda and members of Brian’s family at this the first competition.

The winners Francis Howard, David Hall, Mark Whittaker and Alan Benwell (93 points) thanked Linda for providing and presenting the splendid trophy. Runners up were Steve Travis, Dave Barron, Phil Geoghagan, Jim Leonard. Third were Lesley Bates, Colin Burns, Stephen Paybody, Stuart Scott. Longest drive Colin Burns. Nearest the pin Phil Geoghegan.                                    Keven Martin was the only golfer who managed to score a two and who won more balls than he could ever have dreamed of!

A great occasion was applauded by all the competitors in the memory of a very special brother, friend and colleague.

Thank-You to all our awesome volunteers